Jeebus! Who put this here?

Hopefully not for a little while yet

Hazel
Josh Strider (PhantomStrider) is an Australian / Canadian YouTuber who runs two YouTube channels, focusing on top 10 lists, Vlogs & movie reviews. He generally presents in a friendly, welcoming manner. Josh’s focus is on offering easy listening and a calm respite to whoever is interested in animation, gaming, Disney, kids shows and cartoons. His main YouTube channel is PhantomStrider and his secondary, casual channel is LiveStrider.

The majority of Josh's videos have been about some form of animation. In more recent years he has begun to talk about gaming too. Common topics include Disney, Cartoon Network, Spongebob Squarepants, Nickelodeon and overall good/bad animation.

Josh is a psychology student at university. He runs obsessively in his spare time and has done 12 marathons (42km) and 3 Ultra Marathons (56km & 67km) so far. He also likes to do "let's play" videos with his brother Ben on his second channel LiveStrider. He likes to watch Disney movies whenever they come out in the cinema. His favourite fruit is bananas and apples. He likes to livestream at least twice a year to raise money for charity. Typically charities for mental health. His absolute favourite sandwich is peanut butter and banana.

He really enjoys nature and running/hiking out in the forest and mountains.

Josh worked alot of odd jobs over the years. This included pizza delivery, KFC, Subway, service station attendant, store clerk, hotel receptionist, car shuffler, dressing up as superheroes for birthday parties, and a gas station (which black marked him for being late). He also served briefly as a Signal Intelligence Officer in the Navy. He enjoys playing villains in community theater performances.

Josh identifies as a Secular Humanist. A Humanist typically rejects the idea of a supernatural being but puts a focus on kindness, with a base of science for answers to origin, etc. Humanists try to base their ethical decisions on reason, empathy and compassion for others.

He also practices regular mindfulness meditation. He tries to practice (some) of the values of Buddhism. He also runs a group called the "Humanist Club of Friends" aimed at promoting fellow human kindness, meaning and togetherness without the requirement of a religion or a supernatural belief.

Although he is not English, his accent is often mistaken for British. Some of the closer channel community speculate that his Asperger's bends his accent towards this speech style.

On 12/02/2017, Josh ran a Live-streamed marathon to the public in order to raise money for the American Foundation of Suicide Prevention. He did another LiveStream on 26/09/17 to once again raise money for the AFSP. This time he did a 100% play through of Sonic Mania with his brother Raz. He did a third livestream later that year by dancing non-stop on Just Dance for 5 hours.

Josh did a similar live-streamed dancing charity on 16/03/19 to one again raise money for AFSP. Josh is helped by his brother Raz whenever he does these.

Strider began his videos in 2014 occasionally showing himself in a maroon-colored shirt. He was almost always at his computer in a very bare, minimalist room. His first appearance for more than 2 seconds was when giving out hotline numbers during Worst Family Guy Episodes. Strider began to appear more often doing silly things like dancing to sitcom songs such as "Jessie"

The first person to appear alongside Strider in a review was his brother Raz during Worst Games Ever Made whom helped him talk about Sonic the Hedgehog 2006. This was later followed by a guest appearance from his friend Animetist when they reviewed the most popular films in the world.

Strider did not appear for more than 5-10 second on camera until July 2016, where he began doing Top 5 lists on his smaller channel LiveStrider that he narrated on-camera. Josh's on-camera movements were often described as over-exaturated and strange. He eventually attempted to counter this by tying himself up to stop his arms moving with minimal success. These videos led to the mini-series "Cartoons from around the world" wherein Strider looked at good/bad cartoons from various countries.

At the beginning of 2017, Nostalgia Critic was briefly introduced in Worst Movies of All Time, revealing a "shared universe" between the two critics. Robyn from Anime America was later introduced as Strider's go-to expert for whenever he needed help discussing anime. Dennis, (AKA: HoodoHoodlumsRevenge) was introduced as Strider's friend who helped with discussing Creepypastas. BlameitonJorge was also introduced during the Creepiest Kids Show Characters, whom gave Strider a second opinion in discussing uncanny kids show mascots. LuigiFan00001 (AKA: Matt) was mistakenly called during Top 5 Anime I Hate That Everyone Likes. whom offered his help in the future with any Nintendo-themed lists. Various other critics such as Alpha Jay have been introduced since then for guest star appearances.

By 2017, Strider was doing on-camera video reviews frequently on green screen, allowing him to point to problems and frustrations with cartoons directly. It also offered him a new creative outlet and a way to "travel" to different countries.

Strider moved houses again in September 2019, picturing this as due to the Korean Leader Kim-Jong-un bombing his house for making fun of his drawing in Worst Korean Cartoons. 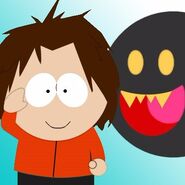 Strider during a 2016 review
Add a photo to this gallery
Retrieved from "https://phantomstrider.fandom.com/wiki/PhantomStrider?oldid=21755"
Community content is available under CC-BY-SA unless otherwise noted.